Battle of the Bulge - The Twin Villages After Action Report 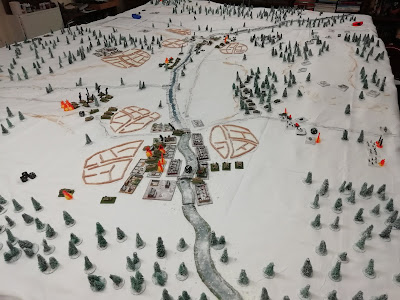 I’ve posted a number of times about the Battle of the Bulge game we’ve been planning for some time. I’ve covered the infantry, vehicles, trees, the table set up and the scenario. It may be worth having a look at those before reading this AAR.
The game was played over several nights by 4 players with two on each side. I led the US forces with Dave the Designer leading the Germans. Once initial set up was complete I outlined the table terrain and it’s effects. There is a substantial amount of terrain on the table with a number of effects. This had a major impact on the battle, with the difficulties in crossing the main section of river west of Wurzfeld in particular constraining the German battleplan. Height advantage played its part, with the Germans generally disadvantaged all through the battle. The snow was considered light and had minimal influence on the game.

For both sides this was a do or die battle. The Germans had to capture the highest point on the table, effectively requiring them to eliminate the US forces on the table. The US objective was simply to hold on until nightfall. If the Germans failed the US players would win. 14 turns of battle would follow.

After a brief planning session the game began.


The German battleplan comprised three main thrusts. The first to the east sought to capture the Twin Villages of Krinkelt-Rocherath. The central thrust sought to capture Murringen and Wurtzfeld. The western attack through the woods sought to outflank the US defence but faced a tricky crossing of the river.

The US defence was based on strongpoints. US infantry occupied Krinkelt-Rocherath, another battalion held Wurtzfeld deploying a company sized garrison force in Murringen. US armour was held back below the heights near Krinkelt-Rocherath ready to intervene where needed, whilst the last infantry battalion was placed close to the centre in semi reserve able to counter any flanking attack from the west. Considerable artillery resources were held off table with command prioritising support in this battle.


The game began with German forces starting to enter at the southern table edge. Fog, and clogged roads slowed down deployment and it was an hour before all German formations were on table. In addition aggressive defence by the forward US elements forced some German formations to prematurely deploy near to Murringen and on the road to Wurtzfeld. Elsewhere the US defenders waited nervously.

In the early stages of the battle it was the central thrust that saw the lion's share of the action. A company of US tanks supporting the defence at Wurtzfeld were uncovered by the suddenly rising fog and quickly discomforted by German tanks and artillery. US artillery spotters seized the chance to disrupt the German advance and the 155’s stonked a deploying infantry battalion disordering a number of platoons and forcing it to seek shelter in the woods.


Meanwhile the Germans advanced on Murringen where US infantry in M3 half tracks hoped to fight a stubborn delaying action.


The Germans relying on weight of numbers attacked quickly. The US infantry was hit by supporting fire before being assaulted by infantry supported by 251s. The US troops fought bravely and although suffering heavy losses gave as good as they got. Pushed back they counterattacked, before being eliminated by the next German assault. Although scattered the US force had hurt the enemy and, more importantly, a single company held up two German battalions for almost 3 hours.


Elsewhere the Germans advanced on both Krinkelt-Rocherath and Wurtzfeld moving into position to begin their attacks.

German gunners fired on the defenders of the Twin Villages, one notable consequence was that the engineers charged with mining the bridges were so badly shelled they were ineffective for the rest of the game.

US artillery fire, particularly near Wurtzfeld hindered German manoeuvring, as a Volks infantry battalion was caught in the open by the combined fire of 155 and 105mm guns.

In the west the Germans slowly advanced, keeping to the woods. 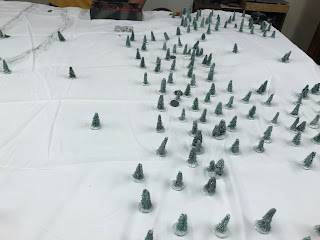 The next phase of the battle was the desperate defence by US infantry in the centre and in the Twin Villages.


German panzer grenadiers and Panzers opened up on Krinkelt-Rocherath, supported by artillery.


The US troops replied firing back with everything they had, but as the Panzers were outside bazooka range impact was limited. So much fire rained down on the US infantry that their battle line was significantly weakened.

The Germans despite receiving heavy artillery fire pushed onwards, the panzer grenadiers assaulting supported by their half tracks.


The attack was a success, pushing the surviving Americans back across the river, although at the cost of breaking the German formation.


This attack was followed by a panzer assault into the town. The Germans desperately short of infantry and with the clock passing midday were forced to sacrifice tanks for territory.

They took the ground, broke the American infantry, and then followed up with a charge into the routing GIs wiping another company off the table.

The only forces left to support this attack was another Panzer battalion. It deployed trying to move forward. However the concentration of German forces in the salient left it exposed and US Sherman’s and Wolverines firing from higher ground across the valley supported by heavy artillery fire caused significant losses.

In the centre across a broad front the Germans advanced, particularly towards Wurtzfeld.

US command and control was poor and the defence unco-ordinated. Whilst the Germans suffered badly from artillery pounding them the US ground forces inflicted minimal casualties. Just as the Germans took the Twin Villages the US forces in Wurtzfeld pulled back and soon after collapsed.


The German advance in the west continued, forcing the Americans to commit their last reserve, an unbloodied infantry battalion. No sooner was this done though it became clear this was an elaborate feint. The full weight of the German assault had been thrown across a narrow front.


The US position was now critical. All the villages had been lost, half their ground forces routed and only 1 tank battalion and a raw infantry battalion stood against the Germans. However the US commanders consoled themselves with the fact that the German’s were suffering heavily. Every enemy formation had suffered losses and several were combat ineffective. The battle was not over yet.

The next blows came on the slopes above Wurtzfeld. Infantry supported by tanks and artillery fired upon the dug in American defenders, grinding them down.


The inexperienced troops suffered steady losses and gave ground. The Germans sensing victory threw infantry and tanks into an assault. The Americans, overwhelmed, gave way routing up the hill. The route to the Heights was open!

At the Twin Villages the few US infantry remaining under command staged a desperate attack against the Panzers. It shattered the infantry but bought time for the US armour to reposition. The Panzers advanced under cover of smoke but couldn’t grapple with the US tanks who pulled back further up slope, with a company providing covering fire.

As the Americans tried to consolidate and establish a new battleline, they had only an intact armoured battalion and the shattered remnants of one US infantry battalion, their morale less than shaky, on table. Opposing them were 4 or 5 German battalions, although almost all had been badly shot up. The tank vs tank ratio was about equal, but the Germans were about 50% Tigers and Panthers vs mostly 75mm Shermans. The Germans had much more and better infantry. The US still had significant artillery support although loss of F.O.s meant 155mm support was halved. The Germans were optimistic the Americans phlegmatic. The next turn would determine the result.

US artillery fire caught the Tigers in the centre out in the open and all 3 suffered concussion effects from incoming fire.

The last German infantry formation still undaunted copped fire from 105mm Shermans and artillery. It caused a bloody mess in the troops that had struggled across the river and were being pushed ever forwards without a chance to reorganise and recover. It was too much and they scuttled back across the river.
Next the German Panzers were ordered forward to engage. The prospect of fighting up the slope against hidden Shermans and tank destroyers whilst dodging artillery shells was just too much. The first Panzer battalion routed back, the other retreated.
The German attack had stalled all across the field of battle! With night less than two hours away the Germans conceded defeat

It was just unrealistic in the time left available for them to rally and reorder their forces and push them up the hill against a determined force of US armour. The game had been in the balance for 12 of 14 turns before attrition tipped the scales in the Americans’ favour.

At the end of the game we had a good chat. Everybody had really enjoyed the scenario and game. The result was pretty much in question all the way through. The difference between the sides had been the weight of US artillery. The Germans were slowly whittled down before finding themselves exhausted with ground still to capture.

As the scenario was intended to test artillery and the impact of height I was very pleased with the resulting game. Artillery carried great power but needed ground forces to be able to follow it up and take advantage. US artillery effectiveness had determined the result - in line with my reading of the actual battle. That the result was in doubt for so long was very cheering too!

Hope you enjoyed checking that out.