As I mentioned in my last blog post, on the various scales in use on the tabletop, I prefer to use buildings on a smaller scale than my figures. As I spend most of my time with 6mm or 1/300 figures I go for 2mm or 1/1000 scale buildings. I love the designs from Brigade Models who have a wide and growing range to choose from.


I am in the middle of painting and basing a scarily large number of buildings, including Russian villages, city blocks and a pick 'n' mix selection for Frost's defence of Arnhem bridge. I'll post on those another time.


I'll start with some shots of a Normandy/ French village and expand it to become a small town. The buildings come from a range of sets including the Normandy village, Railway and English village sets by brigade models. I placed some very confused Russians by Adler and GHQ, on 32mm by 32mm bases, in the photos to give you a sense of size. 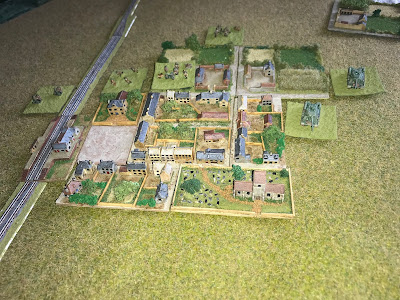 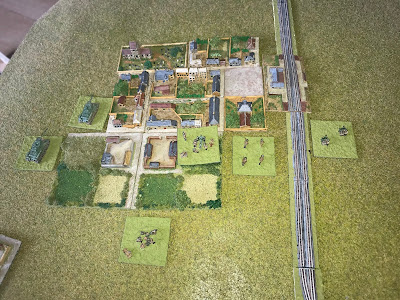 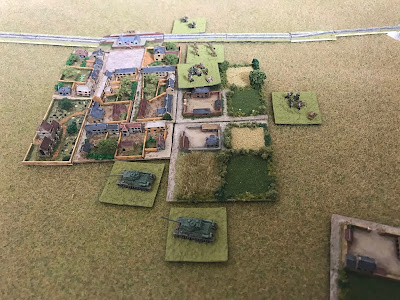 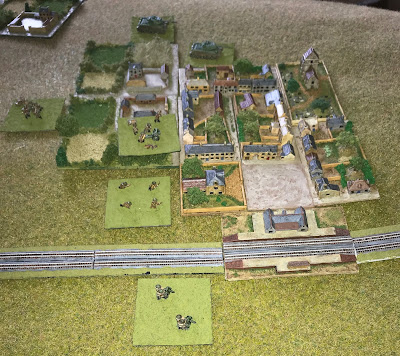 I have based the models on plasticard that is cut to multiples of the base sizes we use in the AHLL rules we're designing. This way we know exactly how many units can benefit from cover and concealment in any given town or village. It also allows me to change the village configuration easily and means we are not fighting over the same village every time it comes out.


The walls are strips of 1x2mm plastic cut to size, the trees are scratch built using twisted copper wire and  coarse turf foam foliage. I cover the base with a very thin smattering of Basetex, dry brushed several times and finished with a brown inkwash.


By adding more models I turn a village into a town. I've included some terraced houses and the factory set, including the large power station from Brigades industrial buildings. 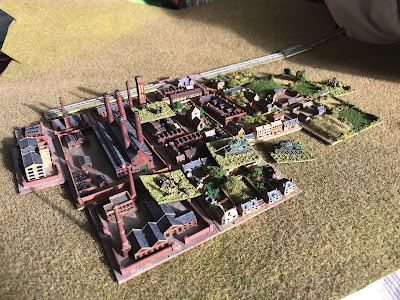 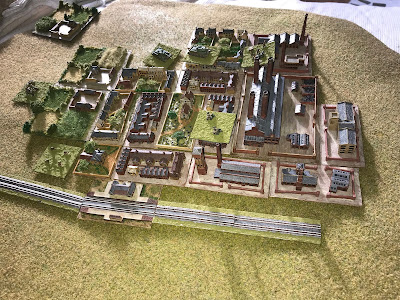 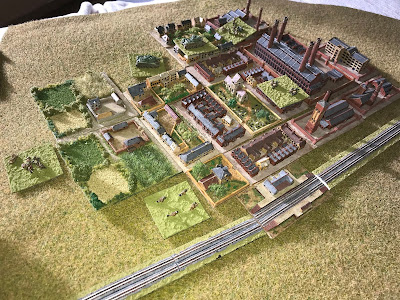 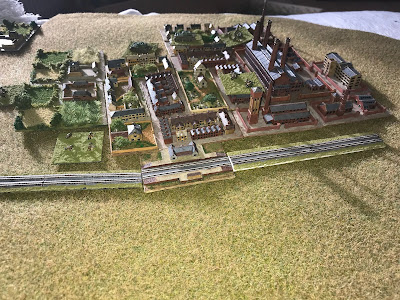 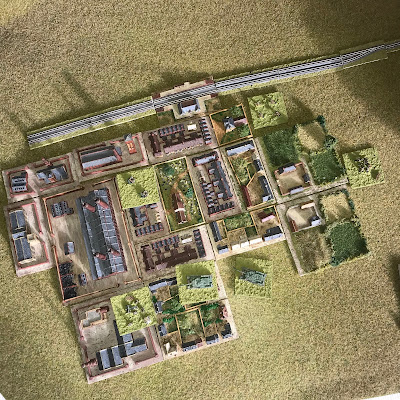 Again all the models are based on multiples of the miniatures base sizes.


Here's a view of a game, with the Germans trying to defend a town (very successfully actually) with models placed in and on the town. 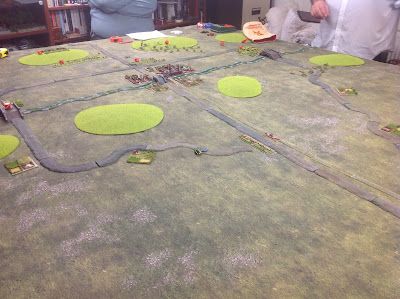 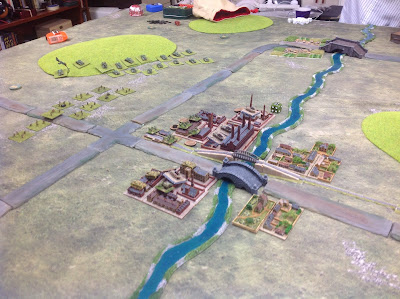 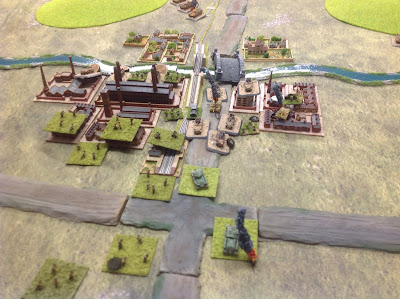 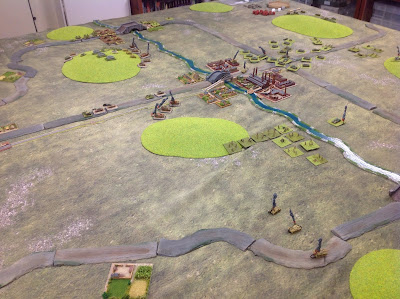 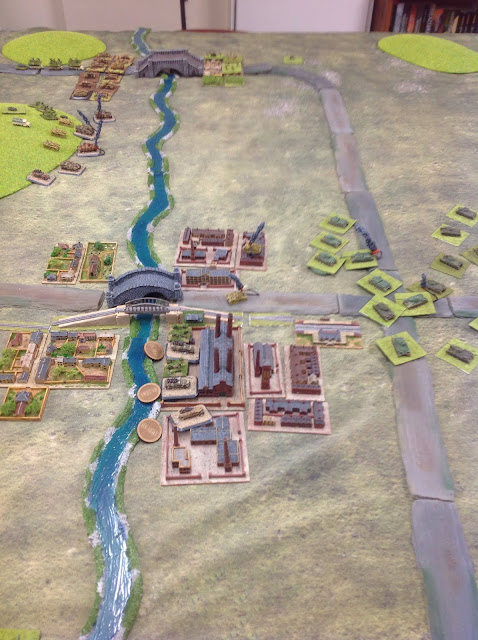 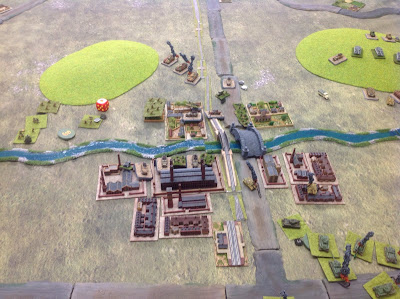 I'm still finishing off more buildings which I'll use to expand the town further and upgrade it to a city. When I'm done I'll post more pics.

In wargaming and terrain its all a question of scale

I’ve always had a thing about the size of buildings on my battlefields. About 20 years ago I built a scale model of the battlefield at Waterloo at a scale of 1”:100 yards. I was using 6mm Adler figures, with 12 of them representing an infantry battalion and 6 for a cavalry regiment. I’d used balsa wood strips to make the buildings, which were placed on the board at ground scale. It’s fair to say both La Haye Sainte and Hougoumont were small.

One of the players had 1/300 scale models he’d built and painted of both buildings. He suggested we use those instead. But they were huge, compared to the battlefield. You could have fit a division inside Hougoumont and I vetoed the idea immediately. I’d built the board - my rules! I used a similar process building a board for Aspern-Essling - at least there the buildings and villages were significantly less important.

But when you look at the tabletop there are so many different scales and compromises.
The first is figure scale, 20mm, 15mm, 6mm, 28mm or 3mm and more besides. I generally go for 6mm as it balances detail with size and cost and allows my to field loads of them on a table top.
But does that figure represent 1, 5, 10, 50 soldiers or tanks?

Ground scale comes next, I’m helping with a WW2 game that has a flexible ground scale but is essentially designed around 1”:50 yards/ metres or 1”:100 yards/ metres. We’re using 1/300 or 6mm figures. That makes the infantry at least 36 feet high (11m) and some tanks more than 50 feet high (16m) according to the ground scale. Infantry on a stand represent a platoon, tanks between 3 and 5 vehicles.

The trees I have are about 4cm high but I use Hexon boards on my tabletop and the slopes and hills are between 1cm and 2cm high. Using ground scale the hill tiers are fine at between 60 and 120 feet (18 - 36m). But that makes my trees 240 to 480 feet tall (70 -140m)! Alternatively taking a tree height as 60 feet a tier would be 15 feet or 5 yards/ metres high - a change that wouldn’t really be noticeable on the average battlefield.
I’m considering moving from individuals trees to a woodland canopy approach. That way I can represent woods that are about 2cm high and in scale with my ground scale and hill tiers. If it works out I’ll put up a post on it.

I prefer aircraft at a different scale. I prefer 1/600 rather than 1/300. It means I can raise then on a reasonably high stand and they blend in with the troops on the ground. Aircraft are huge compared with tanks and infantry.
Then there’s the building scale - which is where I’ve been heading all along - the 1/300 buildings just don’t work for me. They are just too big and I can’t really get onboard 1 large building represents a village. Sorry to all my friends who do.
Equally representing buildings at ground scale loses a lot of aesthetics. If I’m building a scale model (I am working on Arnhem around the bridge at the moment but more on that in another post) I’ll pay more attention to that, but for my large scale 6mm games I’ve gone with 1:1000 buildings.
They are small enough that I can represent a village, but large enough that I can get some detail and features. There are a number of manufacturers producing models at this scale although I tend to use Brigade models. I’m basing them on modular bases which allows me the flexibility to vary the size shape and look of each village or town in each game. I certainly find that using the terrain from a scale or two below my figure scale works very well for the kind of large scale games I tend to play.
So in my scales I'm all over the place! At the end of the day though it’s a question of personal taste, and scale.

The fantastic Sean Clark invited David Wasilewski and myself on to his show to talk about the All Hell Let Loose rules that David has just p... 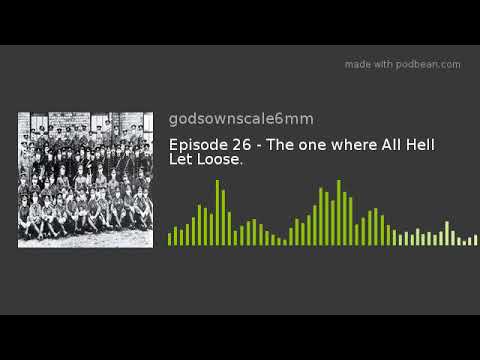