The Not So Lonesome Pine 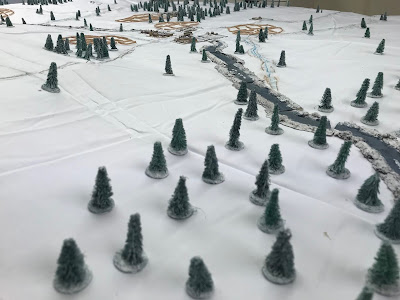 I have been mentioning for a while that I've been planning a Battle of the Bulge game. This month those plans kicked into action in a big way. The game has started and there will be a AAR as soon as we're finished. However a huge part of the set up were trees.

I have a large selection, as do others in the group, of K&M trees. However few of these are pine trees and none are dusted with snow. I needed a lot of them, they needed to look wintery and I didn't want to spend a fortune.

I was looking around for alternative options when Roly the Painter sent me a link to the guys at Little Wars TV. This group of American gamers have a fantastic youtube channel with a huge array of content covering a wide range of periods. They've produced a short video on how to make pine trees from pipe cleaners.

The methodology I'm expanding on is theirs, with some additional input from me on what I've learnt from making nearly 700 of them. I'm not adding much to the concept - its all down to them really - this is just some lessons learnt. 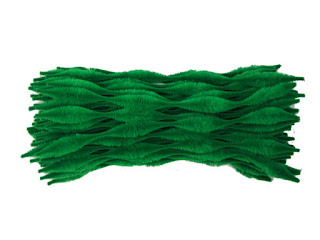 Step 2: Basing
The Little Wars guys based their trees on card in large clumps. However with the number I was going to do this would create an enormous storage problem if I spread the trees out. I decided instead to base each tree individually. This allows me flexibility to change a table layout, move trees out of the way to place minis/ move figures through the trees and minimised the storage required.
I used small value copper coins from wherever I could get hold of them, raiding the shrapnel we brought back from all our holidays. I covered each coin with PVA and added sand. 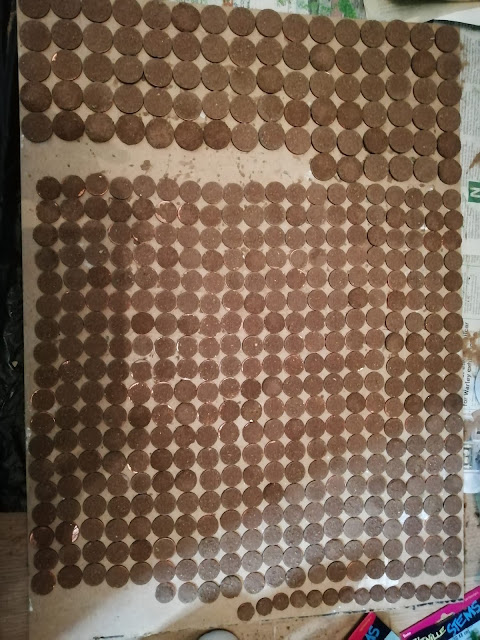 Step 3: Snipping
I just used a pair of scissors and snipped the pipe cleaners. I tidied up the odd tree, shaping it into a sharper point, but mostly I just snipped where felt right. I tend to prefer smaller trees, about 2cm to 4cm so the middle section of some bumps got discarded. I did a lot of this in front of the telly as it doesn't require much concentration. 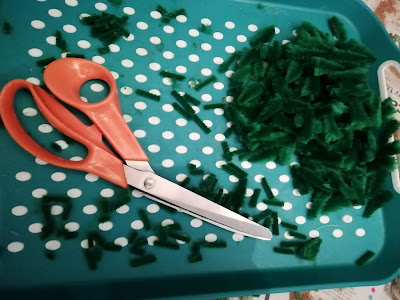 Step 4: Hot Glue
I secured the trees to the bases using hot glue. A decent blob on the coin is all that's required. Getting the wire stuck in the blob is key and I found then smoothing out the chenille helped fluff the tree, particularly when squashed in the pack and that pushing the lower strands into the hot glue really helped secure the tree. I had a number fail to hold, 2 - 3% maybe, but I just picked off the glue blob, cleaned up the tree and had another go.
On the bigger coins I put one large tree and generally a very small tree. This helps break symmetry on the battlefield. 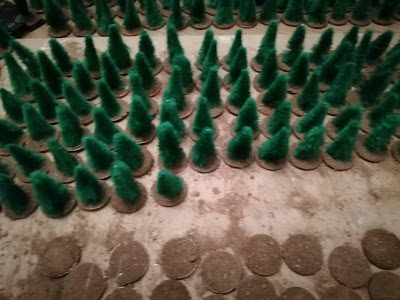 Step 5: Spraying
I used a dark green spray can to spray the trees. Initially I used Army Painter, Angel Green, but I was never able to finish a can due to the nozzle getting blocked. I tried very hard but went through 3 cans and did everything your supposed to do but I just couldn't get between half and a third out. I then picked up a cheaper can from a nearby car accessory shop. They worked like a charm, but were slightly less dark and the paint tended to leech very slightly into the white dry brush paint.
Spraying is crucial as the pipe cleaner bristles harden when coated with the spray - essential for the dry brushing. I broke the trees up into batches and sprayed from 4 angles. I found it was best to give the trees 2 coats to really stiffen them up.
Roly the Painter has suggested spraying the trees black rather than dark green. I haven't tried that but he really knows his stuff so its something to consider. 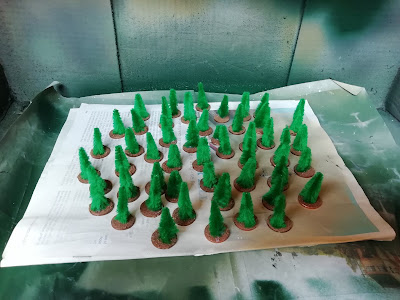 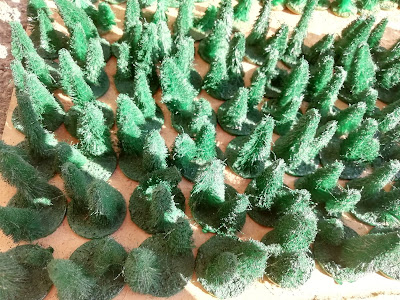 Step 6: Drybrushing
I applied a good heavy dry brush of white paint. It ate lots of paint but I had a can of white exterior stone paint lying around and found that was really good. It takes between 1 and 2 minutes per tree, so stick on some music and lose yourself. Break the trees up into batches. I set myself a daily goal for a few weeks and did it in 30 minute chunks. 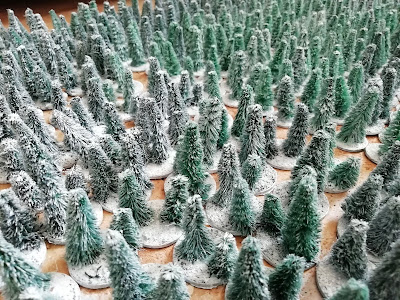 Step 7: Artistic Touches
I haven't got around to it yet but lichen, dead grass etc, would definitely help liven the bases up.

Alternate Colours
I haven't tried it but dry brushing in lighter greens should give a pretty good summer conifer.

Overall I think the trees cost me about £40 - £10 for the pipe cleaners, £10 for the coins and about £20 for the spray cans. I've based about 700 trees on 600 bases so it works out reasonably at less than 7p a base. Each one probably took me about 5 minutes in total to make so not so bad on an individual basis. They seem pretty robust and now I have the trees for the Bulge and winter battles hopefully enough for a lifetime, however, I find myself repeating you can never have enough trees, so maybe I'll do more. 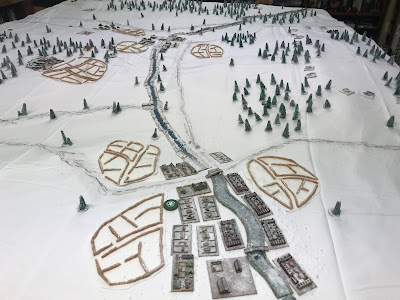 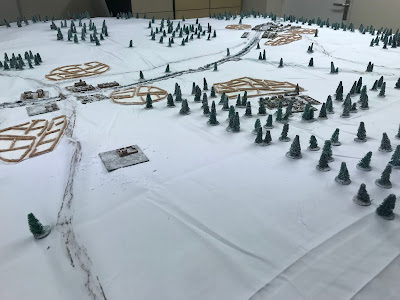 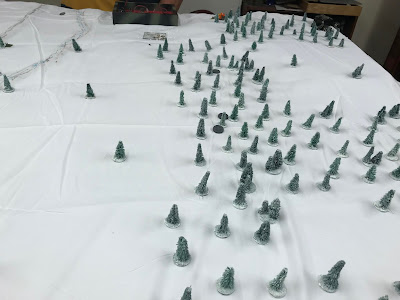 Big thanks to the guys at Little Wars TV for coming up with this, and to Roly the Painter for finding it and looking at me with his big doleful eyes and suggesting I make them.