Imjin Contoured Board, lots and lots of contours 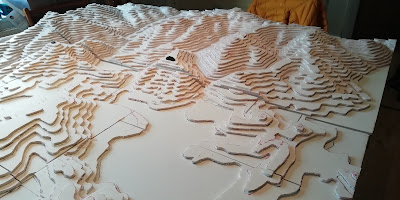 Work is progressing well on my Imjin board with all the contours laid down. I thought I would share my method and some of the things I’ve learnt in case anybody else is crazy enough to try something similar. 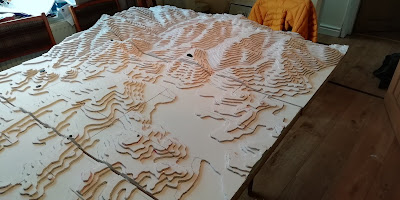 The battle at Imjin was a battle for control of key terrain. The section defended by the 29th Brigade set astride a key route to Seoul. The river crossing and the hills beyond it determined how the battle would be fought. I sought to recreate the terrain as closely as possible because I want the refight to pose real challenges to both sides. With the contours finished I can already see why the Glosters fought on hill 235 and not others and why getting relief forces through was such a challenge. Hopefully this accurate terrain will influence our battle. 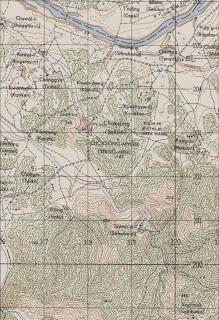 The starting point was finding a map. Unusually I was really well served. I found online a 1:50000 map drawn up by the US in 1950, based on wartime Japanese surveys and maps, updated with aerial information. This is a detailed map, accurate and also as a real bonus is contemporaneous.

I quickly figured out I could fit this section of the battle on a 6 x 4 board but that the other elements of the battle involving the Ulsters, Northumbrians and Belgians would have to wait. I do have delusions of building that as well but it would be another epic build even bigger than this one, so I am not holding my breath. The ground scale works neatly at 25mm, or 1 inch, to 100m. This worked out brilliantly as the contours are mostly in 20m increments. Using 5mm foam board gives me a consistent ground and height scale!

The challenge is that there are lots and lots of hills and contours. Challenging but nowhere near impossible. 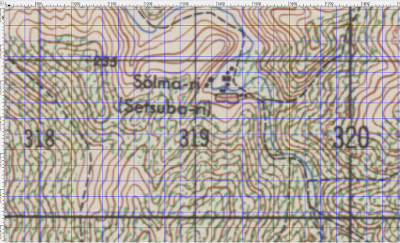 I captured an image of the section of map and imported it into some free image software. I overlayed  a grid so that each square represented 100m by 100m and took snapshots to enable me to work on individual sections of the board.

I marked out 1km lines on the edge of the board so I could more easily figure out positioning. 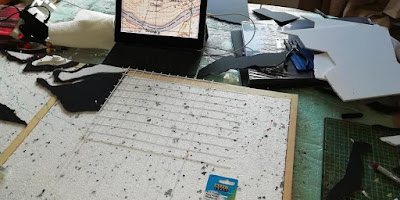 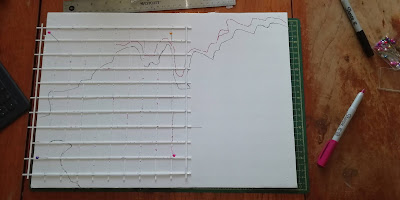 I then created a grid stencil using some thin plastic strips in a 10 by 10 square, 25cm by 25 cm. Using pins to hold it in place I could now transpose the contour lines onto my foam board. Working this way, square by square meant that I could more easily transpose the lines and improved the accuracy of what I was doing because I was only ever working on 1 inch by 1 inch squares. 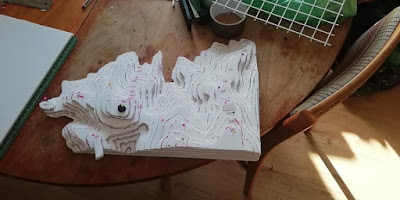 I realised early on that the best way to work was to start at the top of a hill and progress downwards. This approach had a number of benefits,

I used 3 different coloured pens, 1 to mark the current contour layer, another to mark the previous contour line and a 3rd for when I inevitably had to correct a mistake. Three colours let’s you see straight off what is what.

When you do spot an error, and you will, stop. Did you make the mistake on the last layer or did you make it just now because it’s not a mistake and you’ve just got confused. Take some time and verify.

Pins held everything in place, marking key points and places.

Don’t sweat the small stuff. I need to keep repeating this to myself because I can fuss over things being 3mm out.

Don’t glue things down straight away. I went back and added a thin layer so my river could be recessed.

Work in small sections initially until you get used to it. I started with 25cm by 25cm pieces, even when they joined together, before I ended working with A1 sheets. 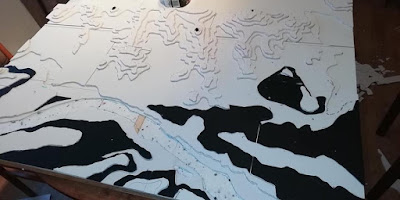 Use different colour foam board if you are mixing different thicknesses. It’s a real pain remarking and cutting out a piece you’ve already done! Confusingly the map uses dotted lines for 5m and 10m contours in places. So always check the map and key before starting out!

Order more foam board, then order some more. Don’t bother trying to keep pieces and fitting multiple layers onto a sheet. It’s just not worth the effort. Just keep a small pile of offcuts and reach for the next one.

Foam board dulls knife blades! Change blades regularly. It’s self defeating to keep a blade that is dragging and tearing. 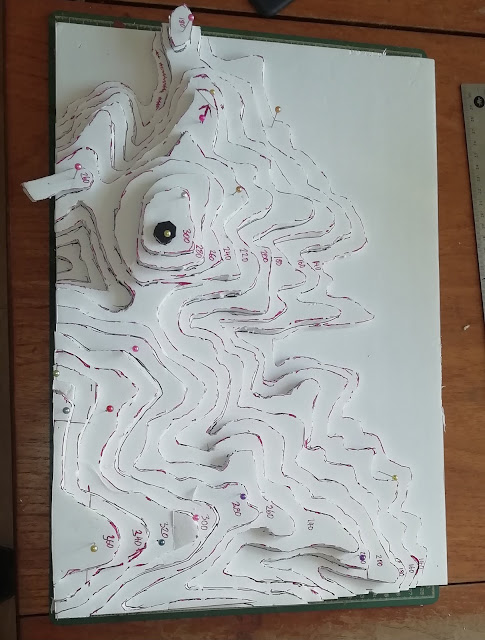 Write the contour height on every piece, often in several places. This helps keep track of which layer you are on - important when you have more than 20 layers! I almost forgot the 40m contour on the last board because the whole thing was above 40m and therefore didn’t need cutting. I’d even glued the 60m layer to the 20m layer and probably discovered the problem less than 5 minutes before it would have been a major issue.

Finally when it was all glued down and laid out it was really satisfying. I am really pleased with the look and the accuracy. It feels like I am doing the battlefield justice and the contours, with the shadows, viewed from a distance show the shape of the hills. 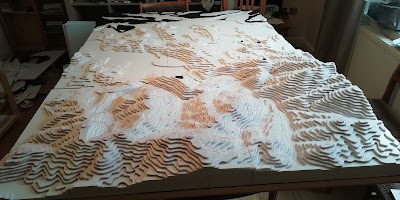 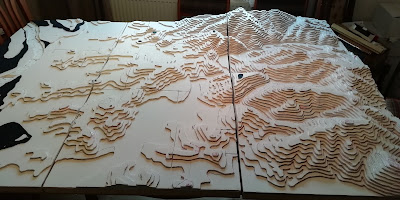 Next up I am going to cover it all with sculptamold trying to keep the hill definition in tact. Hopefully I will be covering that with my next post.

Till then, get some gaming in and stay safe! 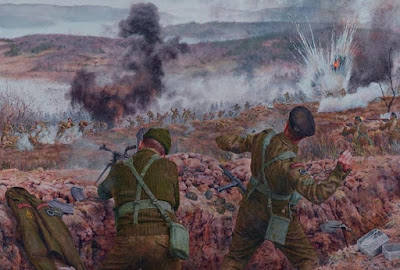 Modifying unit stats and creating your own 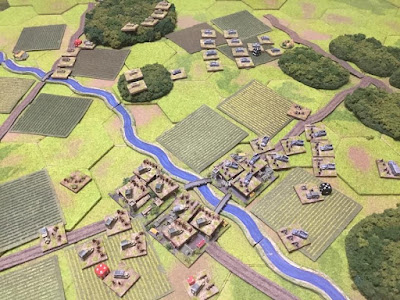 The All Hell Let Loose rule book contains the stats for a range of vehicles and troops for the later war period. We very consciously choose not to stat up every vehicle and troop type for the entire war because it would double the length of the book, take ages to do and incite a thousand flame wars about whether this unit was too powerful vs another. What we have provided is a broad range of unit stats that allow players to use them as a template to build the units they need to fight the battles they want.

Units are divided by type into leg, wheeled, half tracked or tracked. This determines base speed.

Morale and quality is determined by the formation and is in 3 broad categories.

Units have a defence factor. By comparing the various vehicles and troops statted in the game is is fairly easy to determine roughly what any given vehicle should be if you know a little bit about it. These range between 5 and 12, so it’s not that hard to see where your unit falls on that scale!

Units have an attack score, with potentially different values for attacks against infantry than against vehicles. This also comes with a max range, all of which are divisible by 3. Attack values range between 0 and 7.

Finally we have created a range of keywords to describe a unit that apply minor variances. These include open topped for APCs, fast or slow to impact unit movement, optics for long range fire as well as others modifying morale and resilience.

All of this enables players to quickly and easily modify units to achieve the games they want without it being overpowering or daunting.

One of the members of the All Hell Let Loose Facebook group, Charlie Egham, did exactly this and has fought a number of battles set in the early stages of the war in the west set in France in 1940. He has generously given permission to share some of the photos from his gorgeous games here. 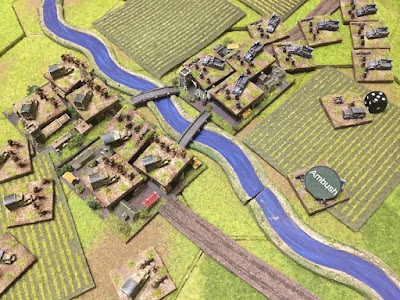 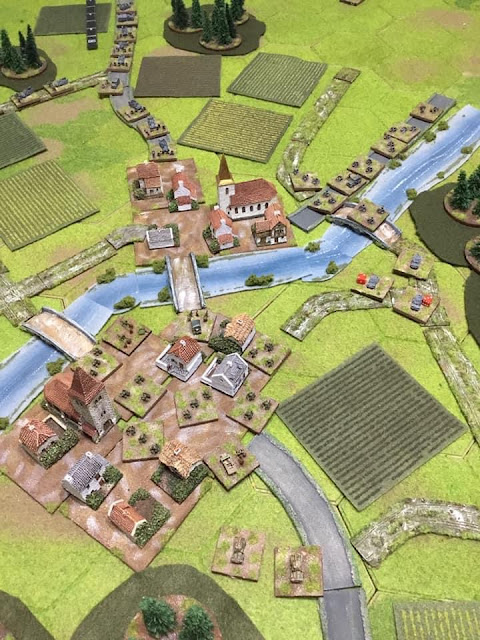 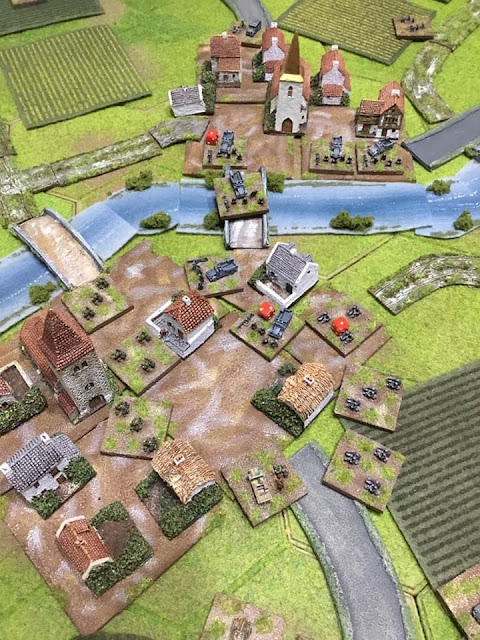 He also uses 2mm buildings when fighting 6mm battles. Go on, give it a try! 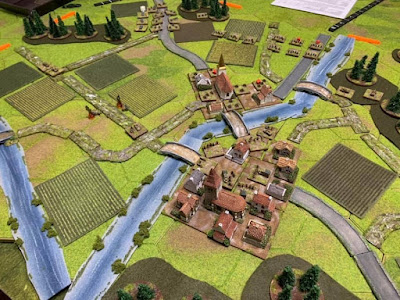 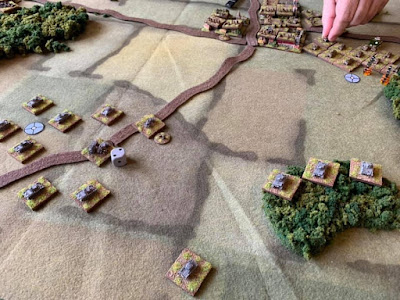 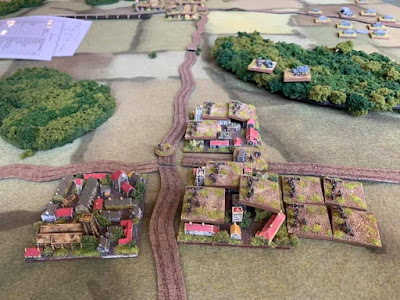 Here in Britain we are now counting down the days to a return to the new normal and I hope very soon to be able to get some face to face gaming in for the first time in over a year!

Stay safe, and roll some dice!