In addition to the game play through I posted earlier I have also uploaded a series of shorter videos looking at individual aspects of the All Hell Let Loose rules. Each video covers a distinct section of the rules and is intended to aid understanding of the game.

This first video discusses how units and formations are used to build armies.

Next I look at how strategic counters can be used.

In this video I outline the order and activation system and rules.
Direct fire, the most common form of attack, is covered by this video.
In the 5th video I look at indirect fire.
The next video outlines the Assault combat mechanic.
In the 7th video I discuss morale, resilience and formation quality.
The next video looks at specialist troop types - engineers, reconnaissance and aircraft.
The final video covers the rally and ambush orders in more detail.
I hope you find these useful. Let me know if anything doesn’t make sense of if you would like to see something covered in more detail.
There are more discussions and information available at the All Hell Let Loose Facebook group.
Keep rolling those dice.
Charles the Modeller
at January 27, 2021 3 comments:

If you haven’t found this podcast before I cannot recommend it too highly. Sean discusses 6mm wargaming with different guests each episode, with previous guests including Dan Hodgson of Reveille Studios, Peter Berry from Baccus, Per Broden from Rollaone, Peter Riley of Polemos fame and many more luminaries from the wargaming community. Please give him a listen, subscribe and talk about 6. 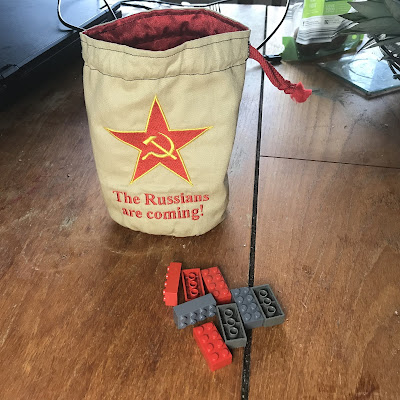 The All Hell Let Loose rules use dice out of the bag to determine the next formation to act. This will be familiar to those who have played games like Bolt Action. Essentially each player places a dice into a communal bag for each of his formations. These are drawn at random and then allocated to a formation for it to attempt to act. I want in this post to talk about how this system can be tweaked or varied to provide more options in a game.

Firstly it does not need to be dice. I have used Lego pieces instead of dice. Playing cards could be used as well. However for the purposes of this post I will refer to dice being drawn out of the bag.

Useful for larger games this allows multiple formations to act the same time cross a large table. This works best when there is an element of separation between players on the same side, such as a main force and a flanking force. Complications can arise when two formations wish to attack a single enemy formation.

Again for larger games rather than use multiple dice bags each dice pulled out activates 2, 3 or more formations. Some thought should be given to spreading the activity across the table. For example each formation activated must be controlled be a different player, or the HQ stands of formations being activated cannot be closer than 24” to each other.

A specific dice is added to the bag to determine when an event happens during a turn. For example the arrival of an aircraft formation, or flanking force. This could also be used for weather events such as a sudden snow or dust storm, heavy rain in a jungle game or fog descending or lifting. This can be varied further with this dice being ignored if it is not the first or second dice drawn out, or placing multiple dice in the bag.

Rather than freely choosing formations to activate each die represents a specific formation, or formation type (tank, infantry, artillery etc). This works better using Lego or playing cards. This will constrain players and is an option instead of using discouraged to reflect poorer battlefield performance, particularly if the troops fought doggedly but were not well coordinated as it will not affect morale tests, for example Russian troops in 1942-3. This is also useful when playing a solo game.

A dice is added to randomly determine the end of the turn. This is known as the Tea Card in the Too Fat Lardies I Ain’t Been Shot Mum rules. Whenever this dice is pulled the turn ends.

Normally one dice is placed in the bag for each formation but in this variant one or both sides have fewer dice than their available formations. This is useful where poor command and control was a feature of an army’s performance, perhaps for French troops in 1940.

Additional dice are allocated, generally only to one side in a battle. This is a useful option when simulating a more manoeuvrable force when dummy counters would not be appropriate. No formation can activate twice but this is likely to hand the initiative to that army by skewing the likelihood they will act earlier in the turn.

One, or more, players are given a small number of dice that can be used at some point during the game, either added to the bag, or available as interrupts. This can be used when you wish to simulate the impact of a particularly effective general and their ability to red a battle.

All Hell Let Loose is now available from Wargame Vault.

I have posted a video onto YouTube of a basic playthrough of the All Hell Let Loose rule system. This is a couple of turns of game play with explanation of some of the basic game mechanics. It isn’t a full game and I don’t cover every section of the rules but it’s intended as a taster and simple run through.
It’s my first ever video so let me know what you think in the comments.