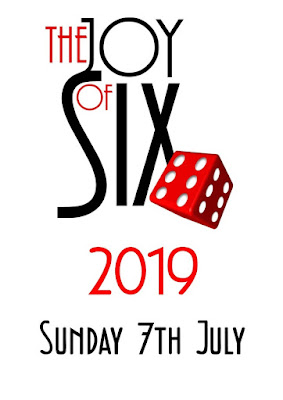 Last weekend I took my eldest son, James 10, with me to the Joy of Six wargames show in Sheffield. The show is put on, and organised, by Peter Berry and Baccus miniatures. Its all about 6mm wargaming and is growing and getting more brilliant every year. Its been held annually for the last 5 or so years at Sheffield Hallam university and this was our second visit. This is very much a personal post about me and my son gaming together.

I live over on the other side of the Pennines about 90 minutes drive away so after we'd dropped the Mrs and number 2 son off at the Meadowhall we were soon at the show. A £3 entry fee and a strip of raffle tickets later and we were in just after 10:30.

The show was bigger this year and there were a number of fantastic demonstration and participation tables set up just as we came in. We had a very quick look around. Hexon seems to be in this year. I have a gross metric ton of Hexon sat around so it was great to see all the different uses it was put to.

The first game James got interested in was a refight of the battle of the Little Big Horn being put on by Wargames Collection Calculator. We got chatting to several of the ladies there who helped explain the background and before long James was taking on the role of Custer. The game was brilliantly staged and set up across 4 battle boards. Other players gamed as Reno and Benteen, whilst the 4th board represented the Sioux village. 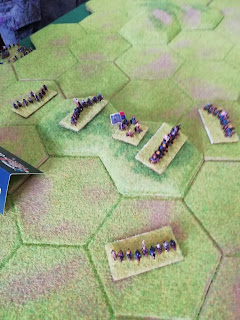 James was outnumbered by the Sioux who tried to run him down. However with great determination and a fair bit of luck (he managed to go first quite a lot) Custer was soon threatening to reach the Sioux village. The Sioux caught him up and launched several attacks attempting to overlap his flanks. But the US cavalry proved pretty resilient and either pushed the Sioux back or routed them. Heedless of the enemy behind him James pushed Custer's men forward and soon they were crossing the stream into the Sioux village. 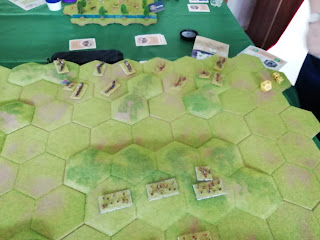 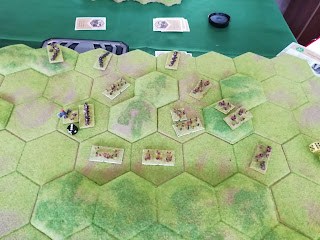 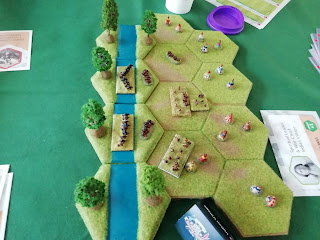 A desperate battle began with Indian braves attacking the US soldiers in the river. Some were pushed back but Custer quickly reinforced the position. Meanwhile on another board Reno had defeated the Sioux and joined Custer in the village! Sitting Bull found his position flanked and with great elan James commanding Reno defeated Sitting Bull and drove him from the table. The battle was won! 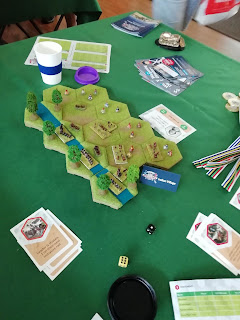 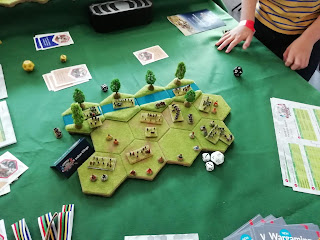 James was roundly congratulated by his very gracious opponents and Peter Riley the game designer who was most impressed, particularly as the game was designed to be next to impossible for the US cavalry to win. James was over the moon and just as delighted to get a medal.
.
We checked out another couple of games, including a D-Day game centring on the defence of Pegasus bridge and then had lunch. 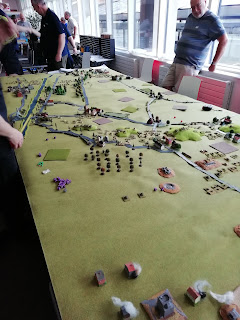 After lunch we checked out the other hall and saw a number of impressive games including a fantastic battle of Poltava. We decided though to have a go at chariot racing which turned out to be tremendous fun as we crashed and banged along the track avoiding lions, Cleopatra's asp and marching legions. 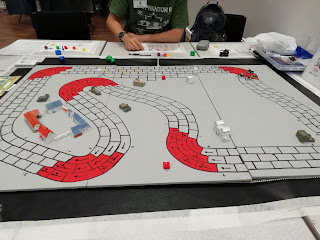 Then came the game I'd been looking forward to for weeks, Daniel Hodgson and Reveille's Battle of Hoth. This is a beautiful game run by two great guys who looked after my son and got him really involved in the defence of Echo base. 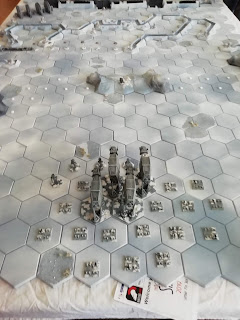 The miniatures are a mix of Micro machines and Airfix models from the Echo Base and Battle of Hoth dioramas. I have 3 sets of the Hoth and 1 of Echo base as well as all the hexon tiles and trenches. I've been waiting for the kids to get a bit older and for them to get into wargaming before I put it all together and paint it with them. There was therefore a lot riding on this game! 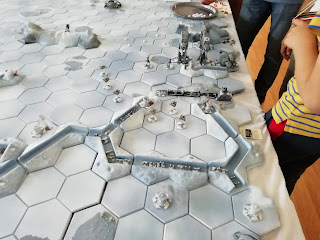 James really enjoyed the game and helped successfully defend Echo base. He was delighted. We thanked Daniel and moved on. After a very quick walk around, buying more buildings from brigade models all that remained was to attend the raffle.

There were a great selection of prizes on offer and enormous generosity from many of the gamers present two of whom donated winning tickets to James enabling him to scoop a couple of pictures to hang on his wall. Thank you to Peter, the traders and some marvellous gamers for making his and my day very special. I think there is another wargamer in the family now!