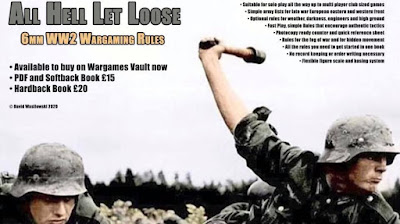 I am absolutely delighted to announce that the All Hell Let Loose ruleset is now available to buy at wargamevault.com!!

The rules are aimed at 6mm wargamers and are designed for European theatre WW2 games and were written by David Wasilewski.

The rules are available in hardback, softback and downloadable PDF.

The game is designed for players to control between 3 and 5 formations each - battalions, regiments or battle groups. These are made up of stands with each stand representing a platoon of about 30 infantry or 4 - 5 vehicles. The game contains a guide for playing at 1-2-1 scale and I used this for my Brecourt Manor game. Basing is 25mm by 32mm but is not crucial we’ve played games with different sized bases without any problems.

All dice rolls us 6 sided dice.

There are only 3 mechanics to learn -

Turn sequence is determined by dice out of a bag

I talk a bit about what we wanted to achieve here and discuss the activation concepts here.

There will be more content on this blog discussing the rules over the next few months and some scenarios for use with the rules.

This facebook group contains more rules information and discussion, please join if you are on social media.

Email ThisBlogThis!Share to TwitterShare to FacebookShare to Pinterest
Labels: Rules