The final piece of development work on the Brécourt board has been completed. The episode of Band of Brothers I have based the board on clearly shows all the gun positions have camouflage netting over them. I believe this was not true of the actual site and battle - the guns were very effectively hidden in the hedgerow and had no need for any camo nets. I will not be using camo nets in the game because they hide the key positions I want players and watchers to be focussed on. However I did look at how to create and model camouflage nets for 6mm figures.

The research I have been  able to do indicates that WW2 German camo nets that are for sale seem to indicate that the nets are 12ft, by 12ft in size. The nets seem to have 50mm or 2 inch sized square holes with the netting rope between 5 and 10mm diameter. 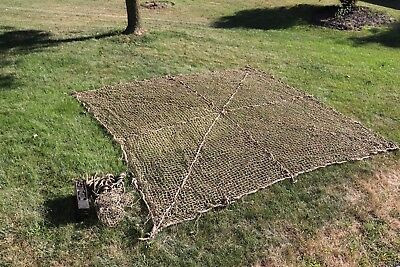 The Germans would probably have been able to cover a gun with a single net but I need the netting to cover a much bigger area because each of my gun positions is designed to have 6 figures on 8mm bases and a gun and ammo boxes in them. Each gun position is about 30mm x 25mm. A little large but doable.

However if we translate the other measurements to 6mm scale the net would have holes 0.16mm square with rope 0.03mm. This is obviously problematic - it would appear to have no holes and be gossamer thin and very fragile. However if I went for cloth with 1mm by 1mm gaps it would result in nets with holes that scaled to 1 ft square! Compromise was required.

The best material I could find was 90 grade cheese cloth designed for straining cheese and other food products. This gave me according to the manufacturer a 44 by 36 thread count per inch and results in holes about 0.3mm by 0.3mm with the thread about 0.2mm thick. The cheese cloth had a consistent weave and thread size at that grade. Lower grade cloths had inconsistent wave and thread sizes so be careful with your ordering! It came in vast quantities, 1 have 18 sq feet of it, or enough to cover the entire board 3 times! Total cost £7. 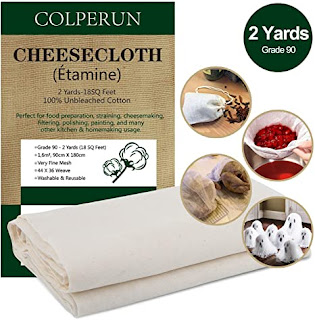 The flow and folds and draping you see with actual nets is really tricky to replicate, mostly because any material available for use is going to have significantly thicker threads scale wise and those threads will have significantly more structural strength. This means the folds and droops have to be recreated through cuts, crimps and layers. I found cloth with thinner threads but this was with hexagonal holes and with non-absorbent/ plastic material. The cheese cloth had a consistent weave and thread size. 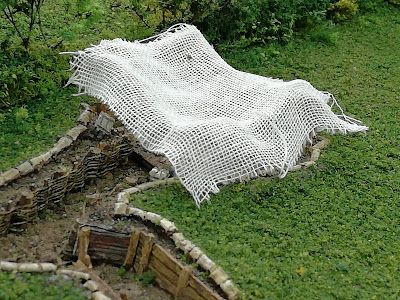 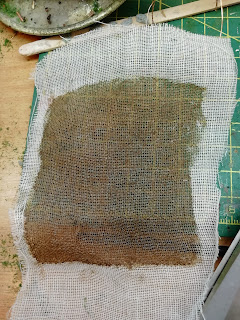 At this point we need to start thinking about how the net would be raised and suspended and how this would impact on the flow and lie of the net. Normally soldiers would have used poles or tree branches to raise the net, with the edges secured by guy lines or held down by "tent" pegs. At this stage though I concentrated on where the poles would be and simply imagined 4 of them in a rough rectangle at the corners of each of my gun pits.

I fashioned a frame from a single length of wire. This is used as a rough guide to form the netting over and I used the same frame for all 4 of the nets. 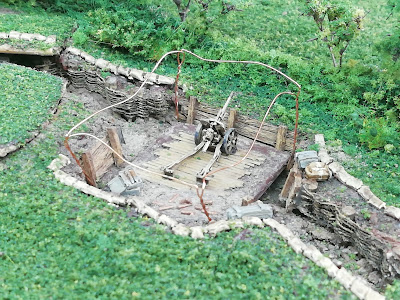 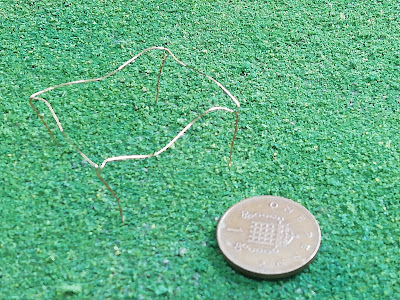 I used PVA to glue the cloth to the frame taking care to push down in the middle to simulate sag. Once the PVA dried I then bent the wire between each of the corner posts to shape the net and bent the cloth down the sides and put some folds in the corner where I imagined guy lines would be attached. The whole thing was then checked against the gun pit and the cloth was trimmed to fit more closely to the ground. I tried to cut the edges with curved cuts so that it would look more like pegged out nets so some thought needs to go into where you imagine you guy lines are going. 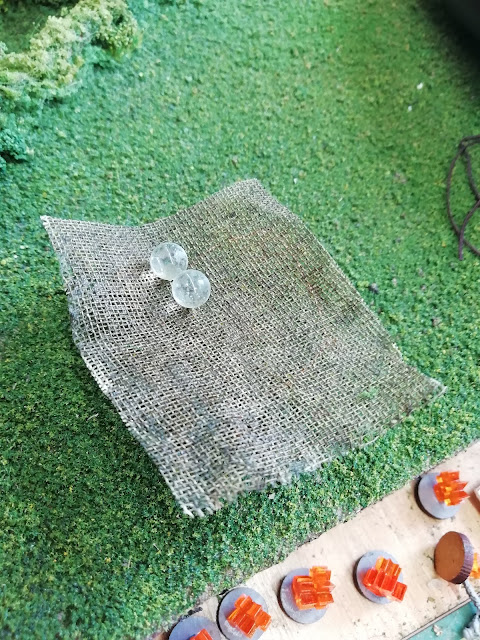 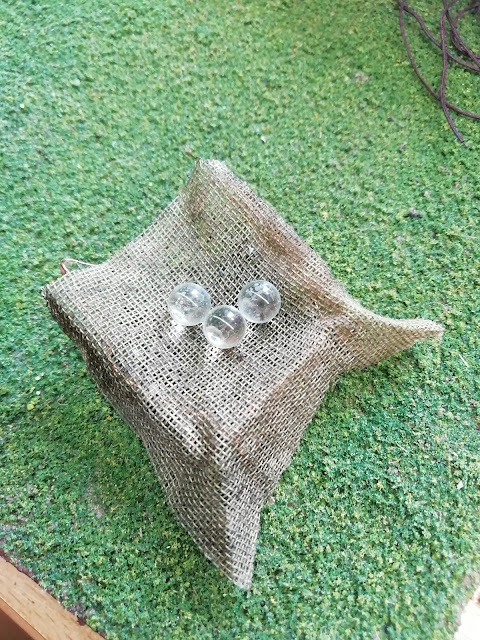 The either watered down PVA or scenic cement is brushed onto the cloth. This is likely to cause the PVA on the frame to reactivate but this is fine the cloth tends to still hold the shape. The frame Some more bending and crimping of the cloth may be required at this stage and I would check it a couple of times quickly against the model. Then it was given a light dusting of Woodlands Scenics Weeds fine turf to simulate the foliage and cloth weaved into the net. I tended to be sparing here as I wanted the netting weave to be visible but this is very much a personal taste kind of thing. I then lightly drape it back over the frame and leave to dry

Once dry the glue holds the cloth in shape and support is unnecessary from a structural point of view. I crafted one net with supports using 0.5mm leather thread dipped in PVA to harden and then superglued in place as a test and it seems to work. 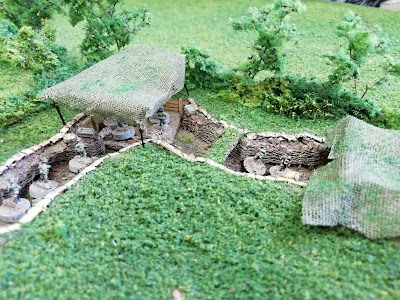 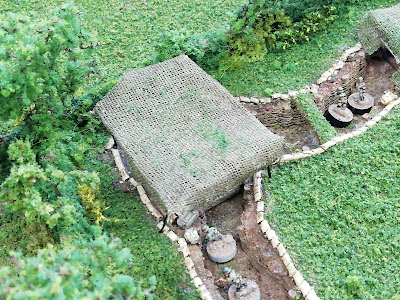 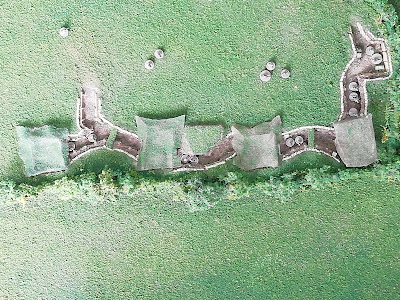 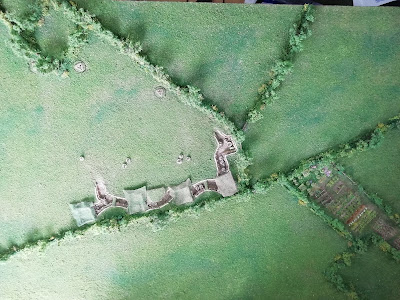 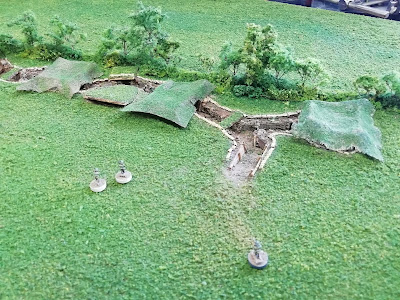 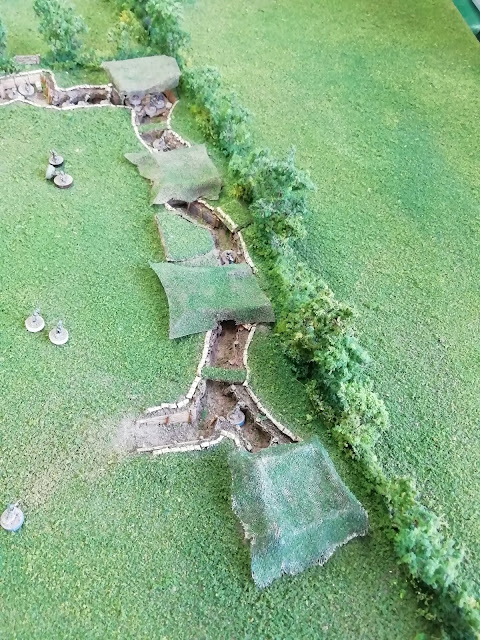 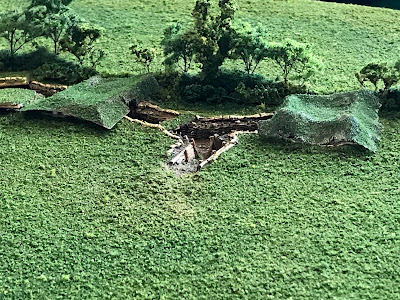 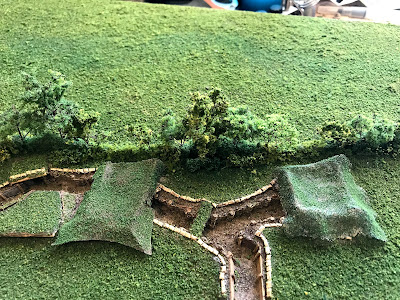 What do you think? Let me know in the comments.