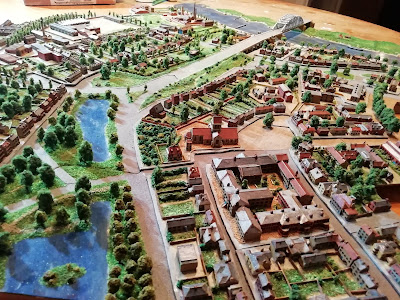 The All Hell Let Loose crew debuted the Arnhem participation game and model that I've been developing over the last 6 or so months at Fiasco in Leeds. It was pretty hectic from my point of view but very enjoyable and I think the game we put on was a resounding success.
We arrived just before 9, quickly found our spot and were rapidly deployed so that by just after 9:30 I was able to take a quick look around. The show was well laid out and there was plenty of space between tables, games and traders. I was particularly impressed by the Brexit game which looked amazing, had a great premise and by the regular shouts coming from the table sounded like a riot of a game. There were some great sci-fi, Napoleonic and WW2 games as well. I didn't really have a chance to look at them in too much detail as I was too preoccupied with running my game.
Leeds wargaming club have some photos here and deserve a big pat on the back for a well run show.
Storm of Steel Wargaming have a short Fiasco video on youtube in which my game features and uses an image of the model as its stock image. Thanks guys!

A somewhat grumpy and less enthusiastic write up can be found here. My model doesn't feature in the only two games "worth photographing" so I promise I'll try to "do better" next year.

The game attracted a steady stream of interest and got lots of positive comments. A number of visitors said they had been following progress online which was also very pleasing as blogs tend not to get too many comments so its hard to know whether people are really reading them. So a big thank you to anybody who stopped by and stroked my ego!
The game itself was a simulation of Graebner's charge when the recon battalion of the 9th SS attempted to charge across the bridge and brush Frost and his men aside. It did not work out well for the Germans historically - Graebner, along with a significant number of his men, was killed, almost all his vehicles were destroyed and the formation shattered.
Players got the chance to play Frost and his men whilst I played Graebner. To add a bit more fun to the party I came up with a scoring system and we had a Top Gear style Lap Time board to record the results. Players lost points for every German unit making it through to the end of the ramp, for every British casualty and for every turn the British player needed to destroy the Germans. In addition players gained a point for every vehicle destroyed with a single shot by PIAT or ATG fire and for withstanding an assault with no casualties by giving me a stirring battle cry. It wasn't really serious but it did add a bit of a challenge to what could be a very one sided fight which used a very truncated and abridged version of the All Hell Let Loose rules. 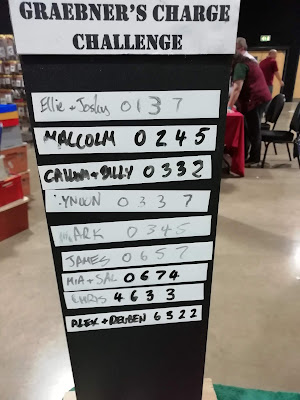 The top scoring players were Ellie and Joshy (aged 5 and 3) ably assisted by their tactical adviser dad.

I was able to run 9 games for 13 people and was particularly pleased that 5 of the players were children - my contribution to the fight against the greying of the hobby. I was also able to entice one player who hadn't gamed in years to give it a go as well. However the real highlight for me was playing with a gentleman whose father was at Oosterbeck at the same time this battle was going on. It brought a bit of a personal connection for me to the real battle for Arnhem.

I think everybody that gave it a go enjoyed themselves and the rules seemed easy to pick up - I had several players correcting me at points! Thank you to everyone who gave the game a go.

Further thanks to Dave, Roly, Mark and Jon for assisting me with transport, the rules, the game, the figures and being great company at the weekend. Thanks chaps!

Pleasingly I was also invited to 2 more shows. I'm hoping to take the game to more over the next year. At present these are

Hope to see you at one of these!