A short while ago, over two consecutive Friday nights, the AHLL group fought the battles around the dropzones at Arnhem on the 17th September 1944. The was a major play test of the rules system we’ve been designing and the chance for one of the group to filed figures he’d painted years ago but never fielded.
Here’s what happened!
Both sides got the following briefing.

Background
It is the second day of Operation Market Garden, September 1944. The first drop of British paratroops landed yesterday but things have not gone to plan. The north end of Arnhem road bridge has been captured but only a small force managed to reach the bridge. The rail bridge was blown by German defenders who are more numerous and better organised than expected. Urqhart is missing presumed dead or captured and the radios aren’t working so nobody knows what is going on and allied air support is uncontactable. Whilst the parachute brigade tries to battle towards the bridge to reinforce Frost’s command, the glider borne troops must hold the landing grounds to enable the 2nd lift due this morning to bring the division up to almost full strength. The Germans rush everything they can scramble and attack!
We got the table put together and organised the forces the night before. Before any figures went on the table it looked like this.
1 inch on the tabletop represented 100 years and each turn about an hour.

The battle is pretty big with lots of formations on both sides. Some of the British battalions were very large and given the size were split into several formations to reflect the operational approach taken on the day. Some of the arriving troops were down scaled in size to support playability.

British Briefing
You must hold the three key landing grounds DZ-Y where paratroops will jump, LZ-X where two glider formations will land and LZ-S where another glider borne force is due. Out of nowhere German units have appeared and they are attacking! Fortunately they don’t seem to have too many armoured vehicles – but there are a lot of infantry!
Push the enemy back, destroy any AA units you see and hold the landing grounds!
Initial British Forces
4 formations infantry with armoured jeep support. Very limited artillery support off table.
2 are veteran, two are regular, jeeps adopt quality of unit they attach to.
British Reinforcements
The British player dices for the arrival time of the incoming troops starting at turn 5. Whilst all forces historically arrived together for the game they would be split. The supply drop by Stirling’s was excluded from the scenario.
Airlanding Turn 1
DZ-Y in the first turn the airlanding begins. 3 Bns parachute troops.
Airlanding Turn 2
Elements of air landing brigade, gliderborne, 1 bn on LZ-X
Airlanding Turn 3
Elements of air landing brigade, gliderborne, 1 bn on LZ-S
Airlanding Turn 4
Elements of air landing brigade, gliderborne, all land on LZ-X

German Briefing
Harry the enemy! Hit him and hit him again. The British are due to land more troops this morning. Your best chance is to hurt them before they can organise. Grab whatever you can get your hands on, anybody who can carry a gun and attack! If the enemy lands you must hold the line.
German Forces

7 infantry formations, 1 veteran, 3 inexperienced - two of which are badly officered. Some off table artillery and limited air support. The Germans also had a number of AFVs an AA units available to cross attach.

Game Duration and Victory Conditions
The game ends at the discretion of the German player as long as it is the end of a turn. It may finish no earlier than one turn after the arrival of the last British airborne forces.
At the end of the game points would be awarded for removing or killing ground units with Brits counting for more than Germans.

The Brits had to beat the German score.

The Game Itself
We had 4 players and so split 2 German and 2 Brits. I was one of the Germans and so this report will be heavily focussed on the German view of the battle.

Initial placements saw the British place their troops in DZ-Y and LZ-X. The Germans came on from along the north and western table edges.
Pretty soon the Germans had begun skirmishing around DZ-Y. This would be the location of most and the bloodiest fights during the game.
The Brits deployed to cover LZ-X but leave LZ-S virtually undefended! 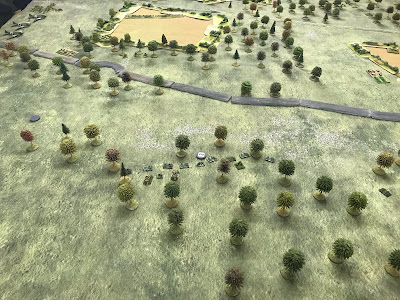 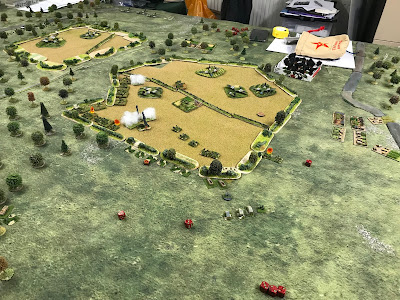 The Germans pushed closer and closer!
The British rolled really badly for the arrival of their reinforcements. Whilst the Germans just kept on pushing.
The Germans begin to make inroads - British losses mount, the heaths begin to burn, flanks are turned.

The British get stuck in at LZ-X. It turns out that half the British force on the table has been pinned in place by the SS Wach Battalion 3, a formation that could be argued is the worst unit fielded by the Germans on the western front. It doesn’t take long and they break and run. LZ-X is secured.
Finally the airlift arrives. Bang on time historically, but maybe a bit late for the Brits? 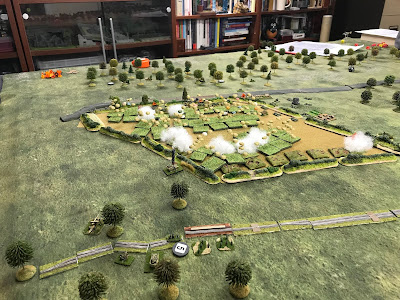 We call the other landing zones. Landings at LZ-X would be unopposed, whilst landings at LZ-S were clearly going to be very badly chewed up. The Paras landing at DZ-Y were going to have to fight! 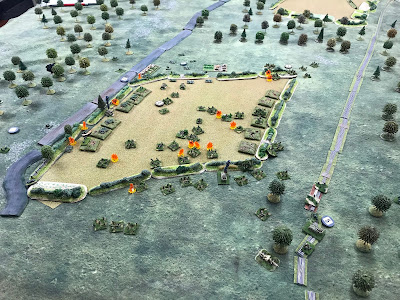 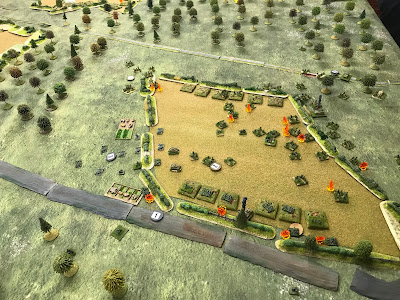 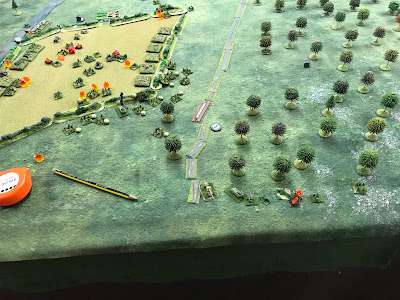 And they fought very hard. 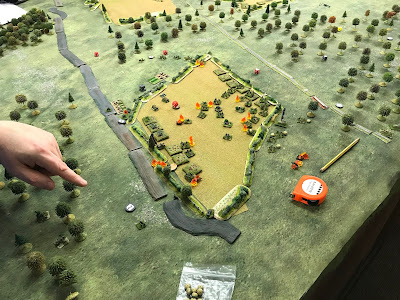 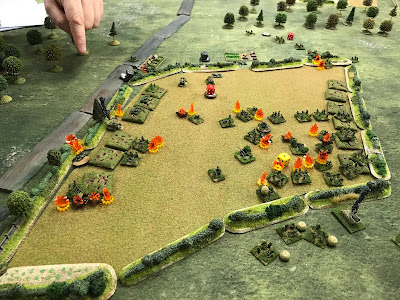 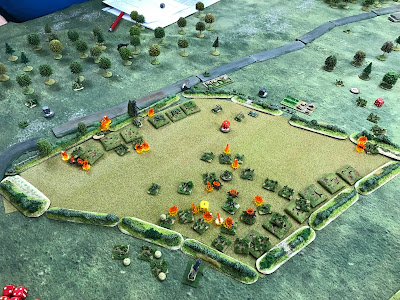 And we called it - a German victory.

Looking back on it I think the British players should have done a few things differently. The placement of their troops was very conservative - understandable given the size of the enemy they were facing, but it didn't create any challenge for the Germans. Greater use should have been made of detachments further forward - vulnerable to be sure - but this was a game about holding ground to buy time.
I don't think the Brits were aggressive enough, particularly at LZ-X. This allowed the Germans free rein over their concentrations on the battlefield and allowed us to attack with numbers where we wanted.
The Brits appalling dice rolls for the arrival of their reinforcements clearly didn’t help and given the historical situation it was very tough for the Brits to win. They did better on the day than the British players did and Arnhem was still lost.
All very easy for me to say - most of my units (SS Wach I'm looking at you!) routed off the board.

However, the game played out very well, the rules stood up well to the playtest and both sides enjoyed it. The game looked amazing and we’d all be happy to give the scenario another shot.
Enjoy your gaming!